All About Windward Studios Licensing

Please use these links to jump to your section of interest.

If you have not yet purchased keys or need to upgrade them, please email sales@windwardstudios.com. 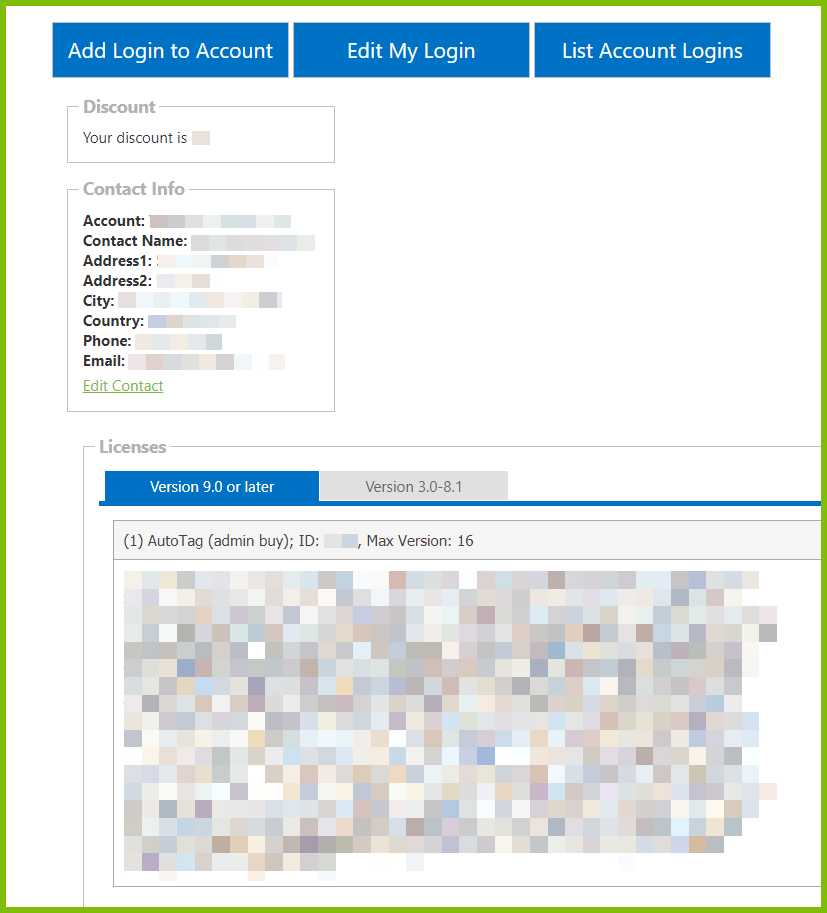 Keys are listed in two sections: version 9.x and higher and version 8.x and lower.

When you purchase a maintenance agreement in conjunction with your Windward Studios product license, you are entitled to install all Support Releases for your version and earlier versions of the software, as long as your maintenance contract is current.

As a general rule, the license key you are assigned will work with the current version of a Windward Studios product; will also work for previous versions; but will not work for subsequent releases. However, if your maintenance contract is up to date, you simply retrieve a new license from the Windward store (see How Do I Retrieve My License Keys?).

If you have upgraded any of your Windward Studios products (a Report Designer or a Report Engine), you may receive a license error similar to this:

If you see this error, your keys are only valid up to the version current at the time you downloaded them (in this case version 15). To fix this, login to the Windward Store and retrieve your current license keys.

When we make any changes to your current keys, such as changing the length or date of your maintenance contract; adding new products; or changing license restrictions (e.g. extending a Report Engine license from two to four cores); you must go to the Store to download your updated keys.

How to update your license keys varies depends upon the Windward Studios product you're licensing.

For the Report Designer, to see the key you have installed, open MS Word, Excel, or PowerPoint. In the ribbon, click the AutoTag Manager tab and click the License button. (You may see a prompt asking if you want to allow the program to make changes to your device - just click 'OK'.) A window will appear with your license key. 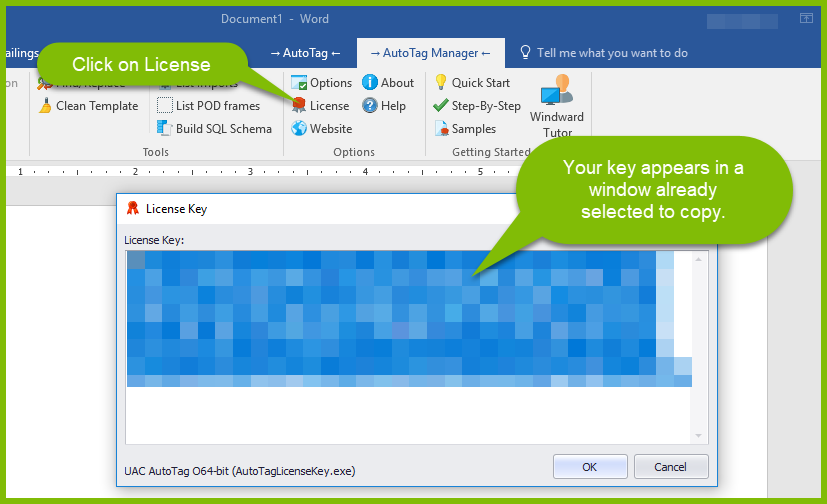 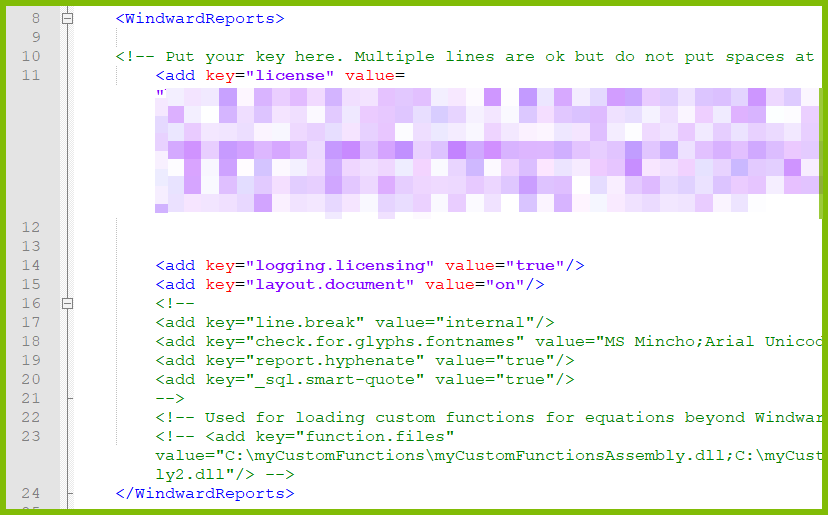 You cannot use WindwardReports.dll.config. And the config file must be in the correct directory - the same as where the <app>.exe file is for applications and in the IIS website root directory for Web.config.

Licensing for Report Engine for RESTful

Here are some tips on using Windward Studios licenses:

If your Report Designer is given a license key for another Windward Studios product, this pop up will appear:

If your Reporting Engine is given a license key for another Windward Studios product, you will see an exception similar to this:

If your Reporting Engine is running on more than the licensed number of machines, you will see an exception similar to this:

If your Reporting Engine is being executed by more than the licensed number of threads simultaneously, you will see an exception similar to this:

net.windward.util.LicenseException: Running on more threads than licensed for. License good for maximum of 2 threads

If your Reporting Engine is running on a machine with more than the licensed number of cores, you will see an exception similar to this:

Developer licenses allow one thread at a time and a maximum of 250 reports a day. If the thread limit is exceeded you will see an exception similar to this:

License Error: Only allowed 1 request at a time using this server

If the 250-report-a-day limit is exceeded, you will see an exception similar to this:

If you see a license exception similar to Invalid license key (BAD_XML), your license key may have become corrupted while forwarding it in email.

If someone who received an HTML email from Windward Studios with the proper license key then forwards that key as a plain text email to another recipient, the email system may corrupt the uuencoded license key string in the original HTML email. Because of this, it is recommended to retrieve your keys from the Windward Store as described above. But if license keys must be forwarded via email, save the keys from the Windward Studios email to a text file, then forward the text file as an email attachment. (Windward Studios doesn't initially deliver keys using this method because the email may be blocked by a firewall.)

During the Report.Init() process the license key file is read and the following license key properties are broadcast:

A running total is kept of the following values, each of which are updated when a broadcast is received on a system where a Windward Studios product is running:

For additional details about how these requests operate refer to the License Copy Protection section below.

Report Engines licensed with a Developer or Test license will print one of the following watermarks at the bottom of the last page of output:

To prevent license abuse, test and development keys generate password-protected (read-only) output, where the password is not made public. This applies to output types DOCX, PPTX, XLSX and PDF.

Some licenses are restricted to running on specific computers by IP address and/or host name. If a license key has this restriction and is running on a computer that does not match the allowed systems, it will throw a license exception and list the disallowed IP address(es).

Restricted by Number of Calling Threads

Windward Studios products themselves are single threaded. The thread count referred to in license keys is the number of threads that call a Report Engine simultaneously to generate output. This thread limit is counted across all virtual machines (VM), Java Virtual Machines (JVM), and .NET Common Language Runtimes (CLRs) on a physical server. If you have two VMs, one with three JVMs and the other with four CLRs, and all are running applications embedding Report Engines, all seven environments count against the total. If those environments each have four threads generating output, the total is 28 threads. But the total is 28 only if all 28 threads are generating output at the same time. If the Report Engines all generate output at different times (yes, unlikely – even with semaphores), then you only need a license that allows one thread.

Because the count is not decremented until a Report Engine's output is completed, if output is interrupted by an exception, or you decide to not complete it, you must call ProcessReport.close() to decrement the count. Otherwise that thread remains counted. If you abort a JVM while output is being generated, all other JVMs will retain the count for all Report Engines generating output.

This section contains detailed information about running Windward Studios products on multiple workstations or servers. It is provided to help the system administrator and third-party developers understand how Windward Studios licensing works.

In each case, when the product starts, it asks all other systems running using the same license to identify themselves. Each system that is already running will respond to that request, identifying itself.

The Report Designer starts when Office (Word, Excel or PowerPoint) starts. It ends when all copies of Office on a user’s workstation exit.

The licensing mechanism is designed so licenses can move between machines. Keep in mind that if you want to stop using a license on a specific server, you must stop all VMs on that server that called a Report Engine.

Each license has a unique ID. Two systems have the same license if and only if they have the same ID and the same restrictions such as product, number of reports, etc. If you purchased three server licenses, and then later two server licenses, you probably have two different licenses and each will have a different ID and will only check for use of itself. In this case, if you would prefer a single license good for five servers (or any number of valid licenses), contact us and we can swap those licenses for a single license good for your five servers.